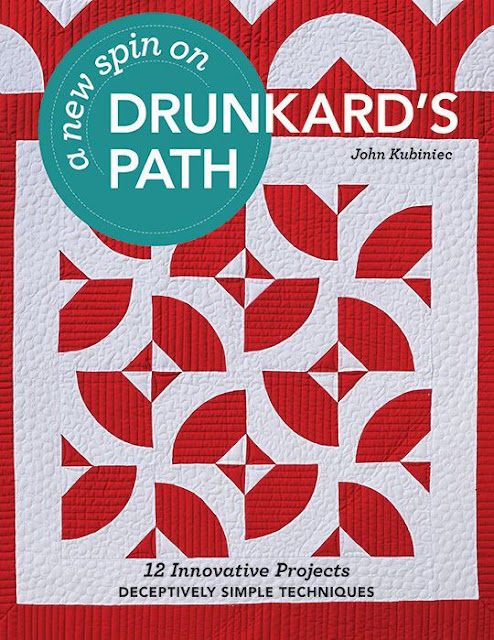 John did an ah-ma-zing job with this book!  I was tempted to treat this book as a work of fiction since it involves curved piecing (I'm a machine quilter, Jim, not a curved-piecer!), but I trusted my friend John and decided to try a block using his instructions.

I picked my favorite pattern from the book, Bowties: 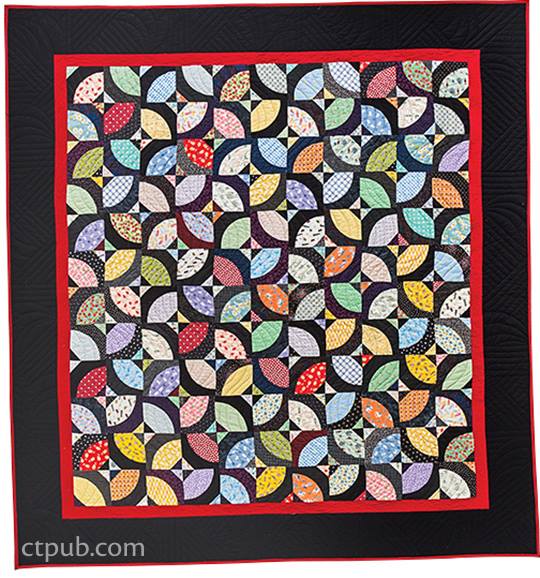 I used Marti Michell's templates and discovered that my 28mm rotary cutter cut the curve the best. 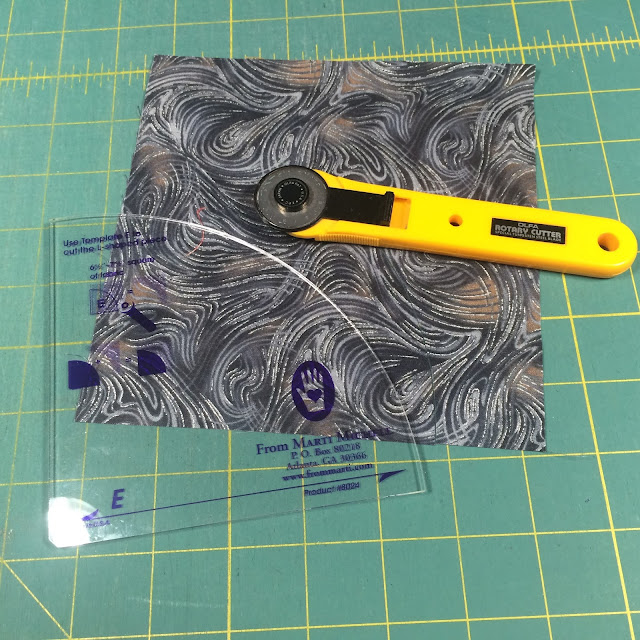 I pieced up a few squares from my scraps, just to see if I could sew curves: 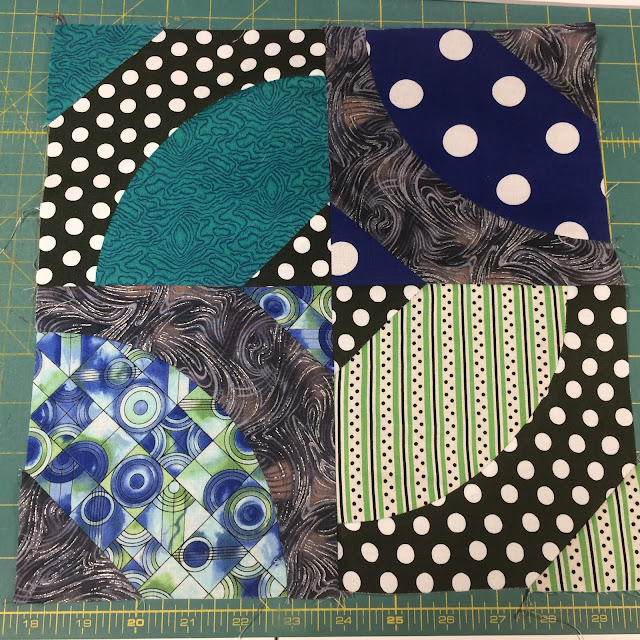 Now I need to make this quilt for real.  Leave a comment telling me what color scheme I should use (pastels, red, primitive, dots, etc.) for my Bowtie Quilt and you'll be entered to receive a copy of John's book (e-book outside of the US) and a set of Marti Michell's Drunkard's Path templates.  I'll draw a name after the blog hop ends and notify the winner!

Hop around all of the blogs that are celebrating John's new book!

Thanks for the chance to win!

Blue and green bowties on a black/white background.

Love the solid colors, but your scrap bin ( and mine too) needs to be depleted so a controlled scrappy one would help with that issue. My 1st Craftsy Class back in 2012 was my 1st attempt at curves and I liked to do them.

Pastels would be very nice. I don't think I would be good at curses but would love to win and try. Looks like lots of fun.

Scrappy Looks happy and you can use all those gorgeous scrap fabrics. Thanks for giveaway, hope to win because there is a curves quilt in my future.
djcutting2 at gmail dot com

I think you ought to do it in oranges, yellows, and golds, in honor of autumn! lynnstck@yahoo.com

My favorite color combination is blue and green. But I also love the modern quilt fabrics that are being produced (those funny mid century modern colors). I am sure what ever you choose will be brilliant!

I think it would be Awesome in Pastels...or 30's prints! Would make it look vintage! Thank you for chance to win your Give-a-way too! :):)

I think it would look great in black, white, red and grey. Really stark and modern to bring out the pattern. Of course the pattern looks to lend itself to just about any fabric combination. Thanks for the chance! Rina

Use pastels! Bowties are so retro. LOL Besides, they'd be beautiful. Thanks for the chance to win the book. I'm scared of curves. :(

I love this version of a Drunkards Path block! It would be awesome in dots!!

Like the quilt on the cover of John's book. For your Bowtie quilt, how about pink, purple, lime green, and gray for the color scheme? Love to read about how you would go about quilting after the piecing.

I have to say I do love the red and white color way.
Remember introducing John to these great templates? I just love them
and use them all the time!

Happy Sewing and thanks for the chance to win!

John's Bowtie quilt is my favorite too! When I make it, I'll use an assortment of "boy" colors like blues, greens, and yellows with a bit of brown. I have a neighbor that is expecting a boy early next year, so this quilt would be for him!

dots and brights would be fun

Oh you should use a solid background and all "dot" fabrics. I'm saving dot fabric for an EPP project one day.

Thanks for a chance to win. Fingers crossed as I'd love to try this pattern.

Always use what you like. I like bright so that would be me, reds would be great. Love this book.

white dots on red would be perfect.

How about reds with that black fabric with the white polka dots!

I love what scraps and colors you already have going - the only thing i would lose would be the busier fabric with the different blues. i love how the teal 'pops' with the black and white dots and the brown wavy fabric. the one with the white bkgd and teal stripes is nice! you could add a bit of coral or yellow to good effect.

I think you should carry on with what you started - B&W/brights - all colours of the rainbow! Basically what John has done but brighter and scrappier. I'd like to do the Bowties quilt with my 30s repros ... so many options! Thank you for the giveaway!

I think the dots would look fantastic!

I would love to lots of dots.

How about all lines cause the pattern is curved. Be opposing?

I like the look of the Bowties quilt. Dark backgrounds but than combined with different shades of one colour, maybe blue?
Thanks for the chance to win this great book.

Stripes or other patterns in the bow-tie and solids in the background.

I love anything with red/white/black:)

I would love to see the Bowtie quilt in polka dots with black as the constant. Bowties is also my favourite of the designs I have seen so far in this book.

I just love the red and white scheme, so that would be my vote. Thanks for the tip on the 28mm rotary cutter - good idea, now where is mine?! Thanks for the opportunity to win!

I'd love to see a Bowtie quilt in polka dots, scrappy! Not sure what to use for the neutral.

I love purples with teal and black and whites mixed in!! mumbird3(at)gmail(dot)com

I think this would be great in scrappy blues & greens.

I think this would be great in scrappy blues & greens.

Two of my favorite types of fabrics are reds and polka dots. How about a quilt using lots of reds and lots of polka dots? Maybe black and white polka dots with a variety of red prints? Sounds like fun to me!

Dots in all sorts of sizes and colors would be super fun!

Scrappy is the way to go!

Controlled scrappy would be my suggestion...but, that is just me. I think whatever direction you choose, the quilt will be lovely.

I love seeing bow tie quilts in retro fabrics. Then again a modern take with a grey background and bright colours would be nice too. I'm looking forward to seeing what you choose.

I definitely think the bowties pattern needs a bold color scheme. The tight turns of black add a lot of movement and keep the focal point moving throughout the quilt. Reds and golds,dark blues and maybe some forest green. Best of luck and thanks for the chance to win!