I was going to write a long post about my 2 month absence from blogworld, but it can be summed up in a simple sentence:

I worked a lot.

Finally, I'm doing some personal sewing again and hope to post photos as projects are completed. In the meantime, check out this: 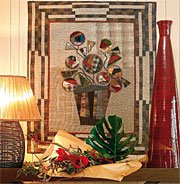 For those of you who read French or can run a translator, click here. I am a longarm quilter and quilted this actual quilt! My name is in the magazine and everything! I just ordered the English-language version of the magazine so I'll have a copy to add to my portfolio.

Even though I work too many hours, I do like working with quilts and quilters and those in the quilt industry. How blessed I am to be a part of this!

Happy quilting to all.
Posted by Debby Brown at 4:28 PM 4 comments:

Today is an incredibly rainy day. Some might say, "It's raining cats and dogs!" I wish! It's actually raining other critters that I don't like nearly as much as cats and dogs.

Todays fun-filled adventure began with a septic tank cleaning. I know, you're jealous. Fortunately it was before the rain and other creatures began falling from the sky.

What could top a septic cleaning, you ask? How about an ear infection? Yes, my darling daughter has a sweet cold that has been haunting her for well over a week and the doctor diagnosed an ear infection to go with it today. She's fine, just feeling kinda yukky and taking her medicines. Much different than when she had ear infections as a baby.

So we ran through the torrential downpour to and from the doctor. And to and from the pharmacy. When we were good and soaked, we got to drive through Niagara Falls to get home.

We live in kind of a wooded area. It is not unusual for heavy rains to bring branches and other debris into the road.

With that in mind, on the way home I had to drive around a dead branch in the road. Are you with me here? Heavy rain, lousy traffic, poor visibility, and a dead branch in the road. As we were just about next to this stick in the road, it moved and stuck out it's tongue. Yes, that's right -- a 6-foot blacksnake blew us the rasperries as we drove by. My darling daughter and I both screamed like girls (which we are) and laughed nearly to tears when we processed what we had just seen. The rest of the drive home was light and fun as we continued to imitate the snake.

My daughter volunteered to open the garage door when we got home -- aren't I a bad mom? She opened it and flew inside. I thought it was because of the rain (It's raining snakes!). No, it was because a huge spider dropped down from the garage door as she lifted it. There is nothing worse for my darling daughter than spiders. Seriously. I parked the car and she pointed and sputtered "spider!" Knowing this is a serious problem for her I volunteered to close the garage door especially since I was now on the dry side of the situation. I stepped around the spider (not for the spider but for my new Enzo Angiolini sandals) and reached up for the garage door while a mouse ran right up to my newly polished toes in my new sandals! Again, I screamed like a girl (which I am).

This girl ran right upstairs and grabbed the two cats and threw them in the garage instructing them that the door would not be open until there was a corpse and I didn't care if it was cat or mouse. Fortunately, the cats took the day and produced a corpse which awaited my husband's return from work.

So, officially, it's rained SNAKES and SPIDERS and MICE. Beat that!

Unsure what could possibly top all of this excitement, I decided to quilt.

It's been a great day. I truly wish they could all bring this much laughter.
Posted by Debby Brown at 7:58 PM 3 comments: