The was the last month of my travel season and I was exhausted most of the time.  In my spare time, I often sat and stared blankly into space instead of reading or doing anything else productive.  I finished a few books, but not as many as I usually do.

Brian's Hunt by Gary Paulsen
An even shorter book than the others I've read in this adventure series for young boys.  A quick evening's listen.

Last Night at the Lobster by Stewart O'Nan
This was a recommendation from a new book buddy.  It's set in Connecticut, not far from me, and I always like saying "Dude, I've totally been there!" about places in books (even more fun when it is in Moscow).  I enjoyed falling in love with Manny.

The Lost World by Michael Crichton
I never read this when it was published.  How did that happen?

Big Magic by Elizabeth Gilbert
Could you hear me read this?  Because my head totally exploded.  I kept fist pumping and agreeing "Yes!" while I was listening to this book.  I will buy this book, mark it up, and read it again and again.

The Girl in the Spider's Web by David Lagercrantz
This is the first Lisbeth Salander novel written after the death of Stieg Larsson.  I have been waiting for my turn at the library since this book was released.  To say I was excited to read this book would be an understatment.  This book was good, but not as gripping as the original three in the series.  The author tried for the dark tone of the other novels, but couldn't pull it off.  It is obvious that the author is planning to continue this series because the book felt unfinished.  I will read his future books, but I will miss Stieg Larsson.

Woods Runner by Gary Paulsen
This isn't another story of Brian; it is instead the story of Sam, a 13 year old frontier boy who rescues his family during the American Revolution.  Gary Paulsen has a way of writing short, fast, adventure novels for/about teenage boys.  I'm not his intended audience, but I will read every book of his in the library.

Harry Potter and the Prisoner of Azkaban by J. K. Rowling
I'm celebrating the release of the Harry Potter audiobooks on Audible by reading through them all.  These are great quilting books: like quilting with old friends.

Sometimes, when I stared into space this month, space was filled with my laptop screen playing Netflix.  I watched:

Criminal Minds, season 10 on Netflix
Because I watched seasons 1-9 about 6 times already.

The Transporter, season 2 on Netflix
Not Jason Statham, but fun to listen to while I'm quilting

Crossing Lines, seasons 1-2 on Netflix
I think I like this and I'm dying to know where Donald Sutherland's character is supposed to be from.

I am trying to make the most of my 42 consecutive days at home.  Do I sound excited to be home?  Because I am.  Really and truly I am.

I want to use this time to get caught up on unfinished tasks, get prepared for the year ahead, catch up with family and friends, and quilt until I wilt.

My first finished quilt project was for a special young man who loves firetrucks.

I purchased a car and truck quilt pattern approximately 20 years ago.  I know that I will likely never make the entire quilt, but a single block made into a pillow seemed possible.  I traced the pattern onto some Heat N Bond: 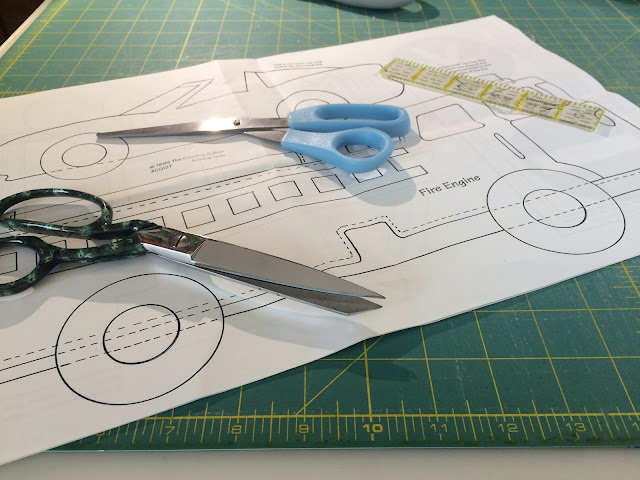 I machine appliqued all of those little pieces in place.  I have great admiration for people who are good at machine applique because I am not.  The pieces are attached and that's all I can claim.  I used WonderFil cotton threads for the applique and they covered up many of my inadequacies: 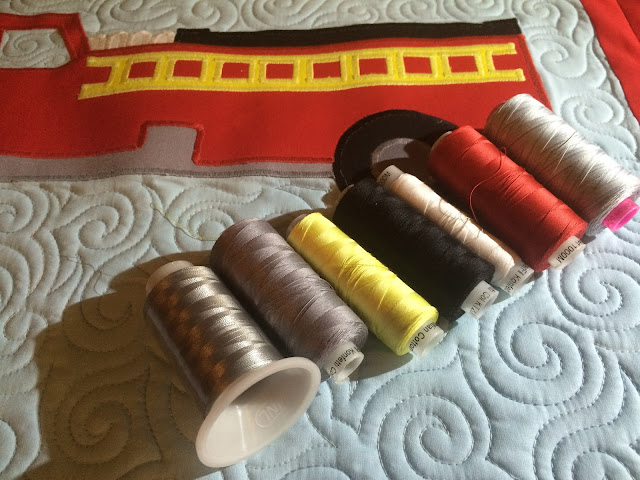 I turned that one block into a "flop on the floor pillow" for a toddler in my life.  I use this pattern for my pillows and they come out perfectly every time.

In one afternoon, I was able to create this: 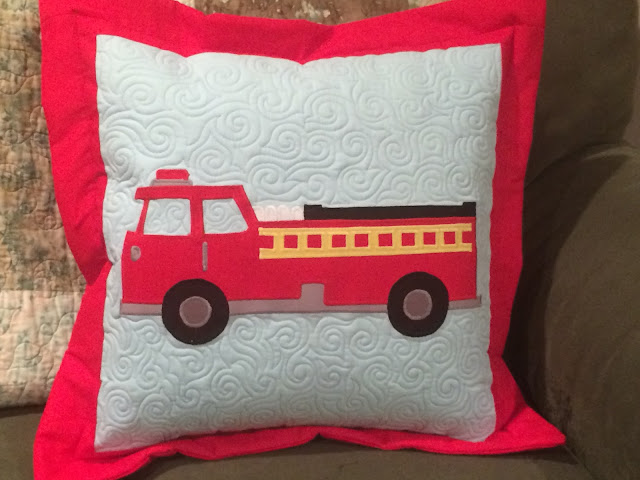 It is not the finest work I have ever done, but there is a lot of love in that pillow.  It was a great first finish for my six weeks at home.

What shall I quilt next?
Posted by Debby Brown at 7:00 AM 2 comments:

More than the Meaning of Life

I am away from home now, teaching at Bits N Pieces in Pelham, NH.  This is my happiest place in all of New Hampshire!   One of the shop's customers made me this amazing beaded ornament: 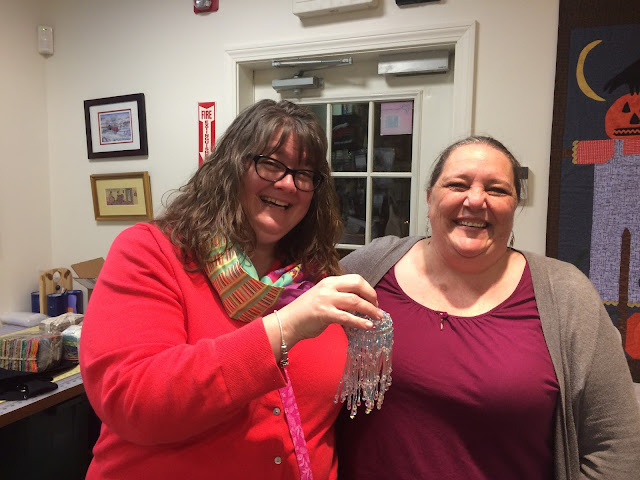 I completely remember what we were laughing at when this photo was taken, but I totally can't tell you.  What happens at Bit N Pieces...

The shop owner, Liz, is completely adorable, the students are divine, the classes are going great, and yet I'm looking forward to the end of this event, just a little bit.  You see, this is my last teaching trip of 2015.  I will drive home on Monday and then spend 42 fabulous days at home.  Forty two.  F O R T Y    T W O.  I can't remember the last time I spent 42 consecutive days at home.  It's likely been years.  Years and years and years.

My head is spinning with the possibilities.  Oh, the things I could do.  The things I should do!  I don't want to hit the road in January and say "Hey, I watched tons of Netflix and slept in a lot."  Obviously I will drink a lot of tea and read a lot of books, but after that I want something to show for this time at home.

What are some of the things I could/should do?  What would YOU do if your time at home was as limited as mine?
Posted by Debby Brown at 7:00 AM 3 comments:

I.  Am.  Finished!  I finished the last block for my Jinny Beyer block of the month quilt. 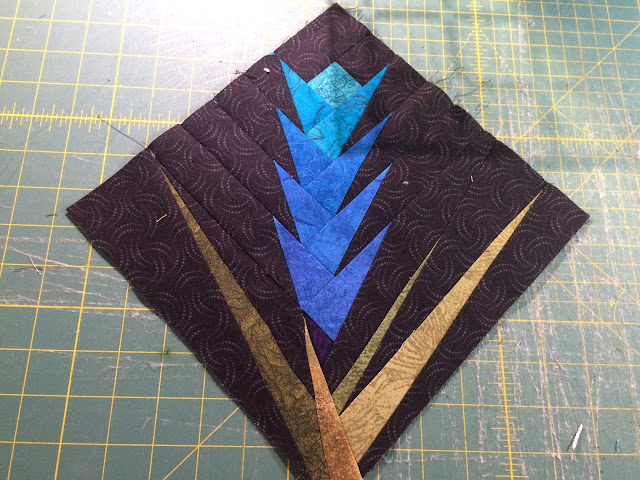 Please be excited for me.  I still have to frame the blocks, make sashings, join the rows, add borders, quilt, and bind, but... I am done with the blocks!
Posted by Debby Brown at 7:00 AM No comments:

And Then There Were Two 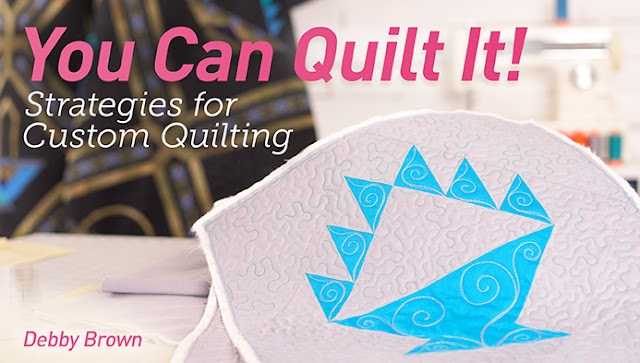 Watch the trailer to see what this class is all about:


If the video doesn't play, use this link instead.

When Craftsy asked me to show how to approach custom quilting, I was thrilled!  I've quilted over 5,000 quilts for customers and quilted hundreds and hundreds of my own quilts over the last 20+ years.  I've developed some strategies for custom quilting and this class shows all of them.

I also snuck a bonus into this class;  FEATHERS!  I show my trick for quilting feathers in one of the lessons.

Use this $20 discount link to purchase my class, You Can Quilt It!
Posted by Debby Brown at 1:10 PM No comments:

I'm celebrating my next-to-last block in Jinny Beyer's 2015 Block of the Month quilt. 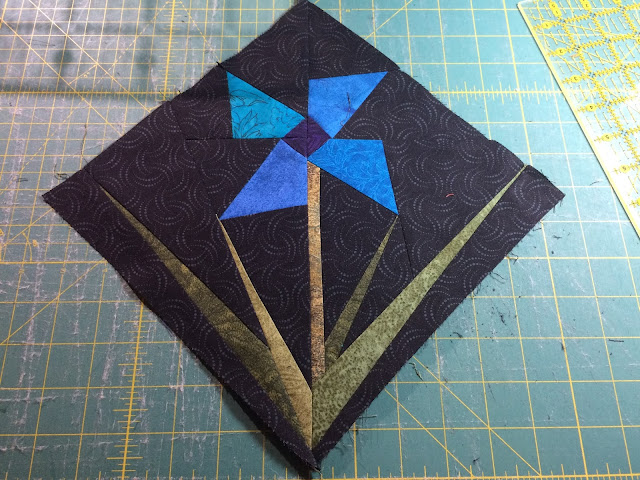 I'm tickled with how this came out.  While I won't run out to say "Paper piecing is my favorite quilting technique" any time soon (machine quilting is my first love), I shocked myself by enjoying making this block.
Posted by Debby Brown at 7:00 AM No comments:

I am racing toward the finish line of Jinny Beyer's block of the month quilt.  I recently finished the Daffodil Block: 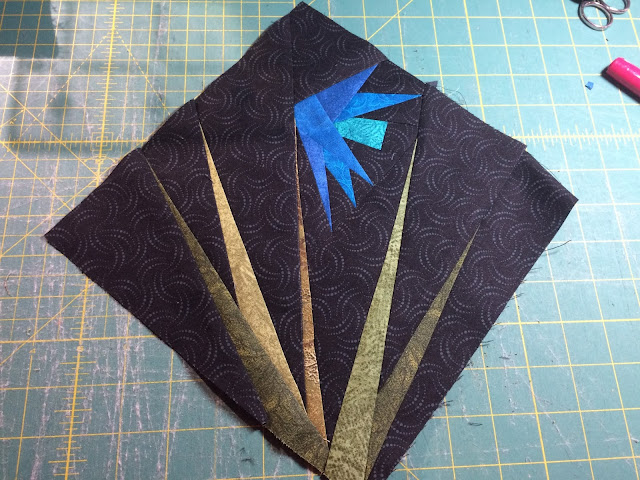 Don't you love this?  I might actually be getting the hang of the paper-piecing thing.

In the quilt world, October is a strange month.  It is a busy! exciting! month where everything happens.  It is also a busy month where industry professionals survive on too little sleep and too much caffeine and keep saying "I'll sleep in November."

My October started with a teaching trip to Spring Water Designs in Columbia, MD. 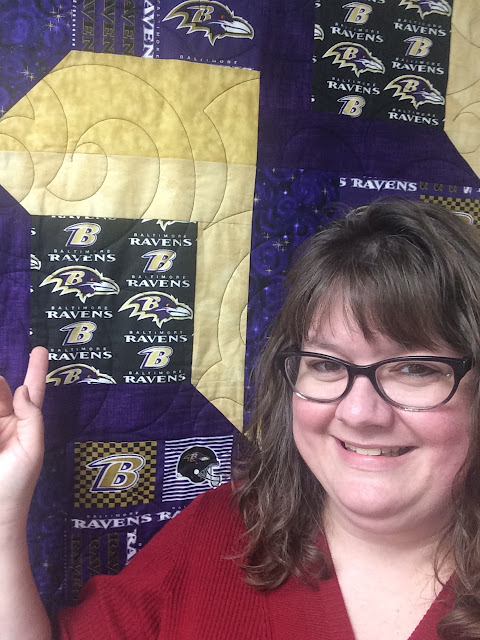 The weather was bad, the Ravens beat the Steelers (boo!), but the students were fantastic!

I spent a few days at home preparing for a top-secret trip that I can't wait to tell you about: 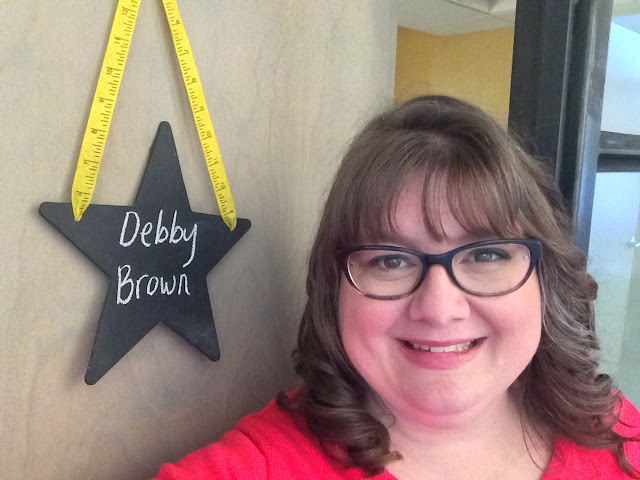 I got the Star-treatment while I was there!

I taught a machine quilting retreat at the Quilt Basket in NY.  Read all about it here.

I worked at home for a few more days getting ready for Quilt Market where I was so excited to be involved with some new products.

Cutie Patterns from the Quilt Basket: 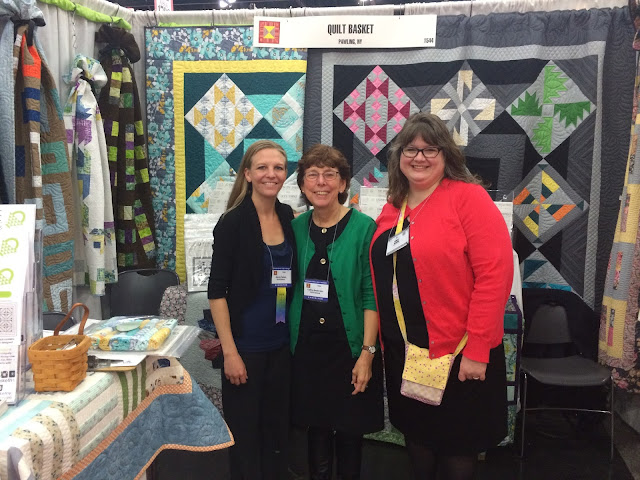 My new line of FabuLux thread from WonderFil: 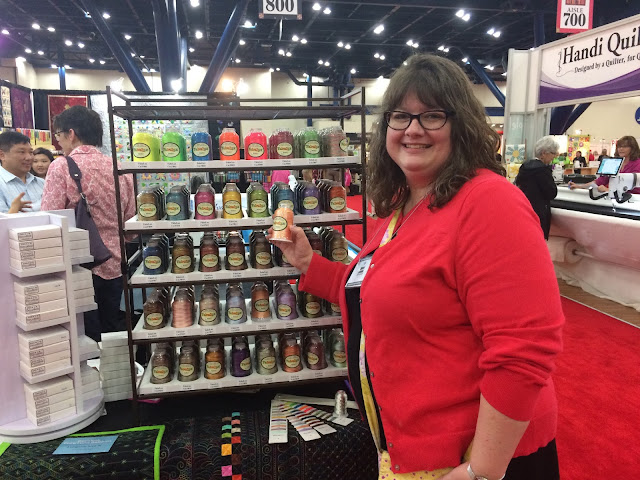 Give me a few days to get my online store up and running with these items, ok?

I taught 24 hours of full classes at International Quilt Festival to the most amazing and dedicated quilters:

I was sad to see the month end and the skies above Houston wept for me, dumping 5 inches of rain in a matter of minutes/hours causing flash flooding that I got to see up close and personal.  Way too up close and personal.  The road at my hotel was flooded.  This was a blessing because I wasn't in my car on the road when the waters started to rise. Two souls were lost in the flooding on Saturday morning while I was safely trapped in my hotel.  I cancelled my first flight and started a long day of cancellation, delay, rebooking, repeat but finally made it home.

Dear November, you have a lot to live up to!
Posted by Debby Brown at 7:00 AM No comments: