This morning I was eating breakfast and I happened to look out my kitchen window to see this: 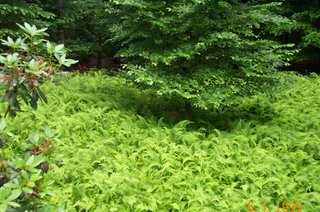 Yes, a tree and a whole mess of ferns. But if you look under the tree on the left side, you will (barely) see a fawn with 2 beady eyes. It's eyes aren't really that beady. I think I had the flash on and caught a reflection.

Since I am unable to capture this (or anything, apparently) with a camera, I'll try to describe what fawn are like. They are incredibly tiny with lots and lots of white spots. They dance around on spindly legs and aren't afraid of much yet. I usually see them alone, but I know that their mothers are nearby. If I attempt to get too close, mom comes in and they burst out of the fern in great big effortless leaps. My best "I wish I had that on film" moment was when there were two fawns playing in the fern outside my kitchen window. I don't think I completely comprehended the word 'frolic' until I watched the fawns dance and jump around each other.

We don't have television in my house. Cable is too expensive, we don't have a clear spot for a satellite, and we never watched it much anyway. In our house, entertainment is called 'windows'. We have a lot of bushes in the yard that look like Charlie Brown Christmas trees because the deer munch on EVERYTHING, but watching fawns at play cancels that out quite nicely.

And, no, you cannot hunt in my yard. Yes, people have asked me.
Posted by Debby Brown at 2:04 PM

okay that is a terrible picture of a fawn but very nice ferns........I have a great picture of an owl if you want to borrow it! :0)