My husband and I drove from New York to Florida for a family wedding in April. I took along some knitting for that long, long drive. Did I mention the drive was long? I finished three soft and fluffy scarves in the car. 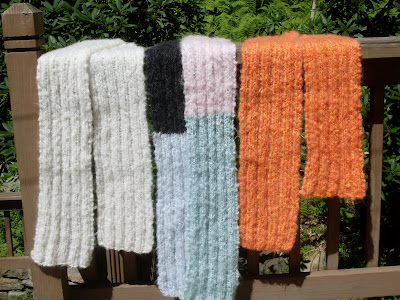 The white one is for my graphic designer, the orange one is for my sister-in-law (this is my only sister-in-law and it's her first Christmas with that official title!), and the scrappy one is for my daughter-in-love's friend that I've adopted as a third daughter.
They were Christmas presents, so I delayed in posting the photo until after the ladies received them.
Posted by Debby Brown at 7:00 AM

Your scarves look really nice and warm. I've just recently started teaching mysel to knit. My first projects were dishcloths, because in Central Texas, we don't need many scarves.

Nice gifts!
and look at all that green and sunshine in the picture....this was not taken recently huh?